Our client called us at the start of the year after seeing our advert in the Listed Property Magazine. She said her house was cold and she wanted it looked at to see what could be done. The house is a large detached grade II listed building built circa 1834

Robert carried out his in-depth condition and damp survey on the property along with a thermal survey to see where the property was losing heat. It was obvious from the Thermograms where the keys areas were and that the property was thermally inefficient both in the ground floor and the roof. It could definitely be made to be a lot warmer in turn saving the client money on energy bills. The condition survey also revealed that the roof was structurally unsound.

The main aspects of work that needed to be carried out were firstly a complete roof renovation, secondly insulation energy-saving work and thirdly general repairs including joinery and brickwork.

A huge scaffolding with a tin roof needed to be erected for the works to commence. Although a large expense the work could not be executed without it. Being listed, every detail had to be agreed with the conservation officer, even right down to the colour of the mortar. The existing roof was recovered some 50 years ago with concrete Redland 49’s that became covered with a thick layer of moss and algae that was too heavy for the timber structure, particularly when they were wet. Most of the rafters were not much bigger than 50 x 75mm and some were even smaller with no purlins. The feet of most of the hip rafts were decayed with virtually no structural strength. The insulation was 100mm thick with the majority of it damp and dirty. Ventilation was non-existent. There was evidence of old and existing wood boring infestation to 50% of the timbers. With the property being listed the conservation officer insisted on all the existing timbers being preserved and the appropriate new structure built alongside to support the old. There was also the extensive rebuilding of two gable end walls which were leaning outwards substantially. This revealed large decayed embedded wall plates and bonding timbers that were the cause of the walls losing stability.

The complete roof area was thoroughly vacuumed and then we were able to install the new insulation (300 thick) to the roof including paying careful attention to the eaves detail packing every void with insulation to reduce cold bridging and insulating eaves tray ventilation. Next, we put the new roof in place which included high-performance breather membrane and new eternite slates. The renovated roof hugely improved the kerb appeal of the property and will make an enormous difference to the warmth in the property.

Internally the property benefitted from insulation to the floor spaces in the dining room and lounge all carried out from the basement. Fibre insulation was packed between the joist depth supported with foil insulation and airtight tapped joints. The basement had the advantage of good mechanical ventilation as well.

Externally the property’s brickwork needed small repairs to the pointing and any spalling bricks were replaced. Then Safeguard Stormdry was applied to all the brickwork. Stormdry is a masonry protection cream which prevents moisture penetrating the brickwork, is vapour permeable and improves the thermal performance of the property to as much as 27% and is approved by the energy saving trust.

It was a large project that took many months; daily supervision and records were essential and each section had to be completed before another started. The plan and methods were all agreed with the local conservation officer, and the client was closely involved in every decision. This all lead to a smooth-running project with a high-quality finish. Find out more about our extensive range of building services…

Send us your name and your telephone number and we’ll give you a call back.

Before and After Photos 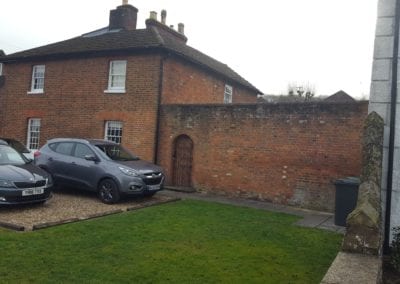